This is exactly what happened. Nothing else in the world existed outside of this tunnel. I can’t even explain how this feels other than when someone close to you has died. That pretty much describes it.

At this moment in time, my daughter was dying and it was out of my hands. What did I do wrong? Did I fall when I was pregnant? I know I didn’t drink or smoke. My mind was in a whirlwind of thought. There was that time I thought I was having a miscarriage at 3 months. I begged God to not take her. Should I have lost her then? She was such a good baby and hardly ever cried. How is this possible?

So, we left the wonderful Drs. office without anything else. We would be called. More waiting. I was going to have to get used to this waiting for years to come. The next 2 weeks were a complete blur. I was contacted by a Dr office of a pediatric oncologist/hematologist. I don’t even remember what order everything went in. They needed blood. She was so tiny they had to take it out of her head. Wow, that was terrible.

We were referred to a couple of different Drs. There was another Optomologist that specialized in special cases. Afterall, we didn’t even know how much she could see out of that eye. Then there were the neurologists. Ah yes, the narcissistic neurologists! Caitlin will put them in there place a little later.

Now we had to discuss and plan. Biopsy first to find out the type of tumor. They would be able to enter behind her right eye, which was good I suppose. They also thought it was a good idea to add her port in her chest at the same time so she wouldn’t have to be put under again. The port would be used for nutrition and chemo, plus she would not have to be pricked every time for blood. They would just take it from there. So, that was definitely a good thing for mom to hear! I didn’t want to have to be yelling at the nurses anymore because they couldn’t freakin get any blood and kept sticking her. I felt like Mama Bear when she hears her cub cry. I just wanted to wack them with my big paw across their face.

Below are a couple of pictures of Caitlin in the hospital. The first picture is of her little black eye from the biopsy. The next of the crib cage, what a happy baby she was no matter what was happening. In the last picture, you can see how much she enjoyed chewing on things that didn’t belong! Flexible little thing. 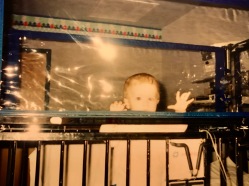 The surgery went well. We made an appointment with the oncologist to discuss the findings. She had a Visual Pathway Glioma, which was a low-grade Astrocytoma.  I can’t believe I still remember that! Apparently low-grade meant slow growing. We could assume that she was born with the tumor since it had grown so much. It was a bit confusing because in the 4 months of her life it grew enough to affect her eye, so to me, that was pretty fast, but I’m not an oncologist. This type of tumor is usually common with neurofibromatosis, which if you remember is what the “elephant man” had. She was tested for that and came out negative. However, it is very rare that this type of Glioma would extend past the visual pathway.  He then explained that the tumor was inoperable because of where it was located in the brain and they didn’t do radiation before the age of 3 because the brain is still developing. So, our only option was chemotherapy. I went ahead and asked the question. Will she survive? He told me that if she made it to age 2 her chances were greater. Making it to 2 was their goal, but it was rare with the tumor this big. Well, Caitlin made it clear from the beginning that she was rare.

When we met with the narcissistic neurologists that thought they were God, that was quite fun. Let’s just say they were a little more blunt than the oncologist. They shot out statistics and they were not good. They didn’t see her living to even 1-year-old basically. Wow, thank you for those hard facts. How often do we have to come see you?

We checked in to the hospital for Caitlin’s chemo treatment. It would be started in the morning. The next morning the nurse came in with a bag with a bright neon orange label on it marking how dangerous it was. As she got the bag ready I began to weep. She asked if I was ok and what was wrong. I said, “I feel like I’m poisoning my child” She gave me a hug and told me this was helping her, but she could understand how I must feel. We stayed in the hospital for a week. I thought I was going to die of cabin fever! I didn’t leave even once. I couldn’t. I found out later that other parents stay much longer. I feel a deep sympathy for them and see how lucky I actually was.

We went home and a nurse came by the next day to show us how to clean the chest port so it wouldn’t get infected. This was the beginning of my nurse training:) I had to keep Caitlin in a onesie under everything she wore or the little stinker would start chewing on the tubes!

I guess I’ll throw this in here because I have to put it somewhere and it will become significant later on. My then husband was battling depression, anxiety,  alcohol, and drug use. He refused to get medication, so he pretty much shut down at this point and I was on my own from here on out. I had an aunt who was helpful and my best friend in town at the time would help as she could. But let’s be honest, I was alone. I would be going to therapy appointments, Dr’s appointments, and MRIs alone.

After chemo Caitlin would have to go to the Dr a couple of times a week to get her blood checked and make sure her counts were in line and not too low (neutropenia). It was expected for her white blood cells to drop and once they did we would be confined to home until they came up because of the risk of infection. I think in the whole first treatment they only went down a couple of times. They both just happened to be Thanksgiving and Christmas that year!

Throughout the first year of her life, she had physical, occupational and speech therapy.  She did start walking at a year, which was normal, but they wanted to make sure she had what she needed when she needed it. She wasn’t really good at swallowing, so was limited to what she ate. She could suck on Teddy Grahams forever and loved oatmeal! Caitlin did make it to age two and was pretty much a normal 2 years old. The tumor wasn’t growing at this time at all. The chemo had worked by shrinking it a little but mostly keeping it from growing. So there…God’s of the brain! She showed you! 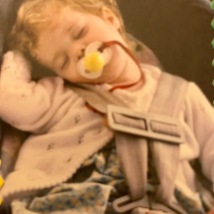 Caitlin did have some blindness in her right eye, so if you notice in the first photo, she would look at things very closely with her left eye.

September always seemed to be the month that things would go wrong with Caitlin. It happened to also be my birthday month. Caitlin started to have some brain swelling, so the Dr. decided to put her on steroids. This was another journey in itself. If you have ever been on steroids for any reason you know what I’m talking about. Caitlin turned in to a hungry Tasmanian Devil!

Apparently, this all was not enough. There would be yet another room in hell that I had to enter…

I am married and a mother of 3. Trying everyday to become more of a minimalist, while also dealing with depression. My goal on my blogs is to help others who could use some encouragement in either subject. Welcome! View all posts by RWalston